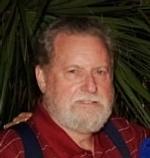 William Martin Fulcher III, best known as “Louie,” died from cancer Tuesday, October 5, 2010 at 10:33 AM, in the Lower Cape Fear Hospice & LifeCareCenter, at the age of sixty-seven.

He resided in Wilmington, NC where he was born and raised. He was preceded in death by his beloved grandmother, Anyse “Lula” Fulcher, his parents, Gertrude Williams Fulcher and David Wilbur Fulcher and his lifelong best friend, Duane M. Coleman.

Louie is survived by his wife Bonnie Warlick Fulcher, his son William M. Fulcher IV, and his three grandchildren Daphne Alexis, Tiffany Nicole and Zachary Ryan Fulcher; brother in law James Warlick, nieces Cynthia Meyer of Holly Ridge, NC and Sheila Joyner of Goldsboro, NC and a host of cherished cousins from both the Williams and Fulcher sides of the family.

After graduation from NHHS, he served his country in the US Navy during the Vietnam War. He and his wife, whom he loved dearly, were married on March 3, 1967. Upon his safe return home, he was employed by the State of NC as a State Trooper, stationed in Johnston County, until 1973 when he left their employ for a career in construction. He was always a hard worker and a loving provider to his family. He retired from Elementis Chemical Corporation in 2003.

He was a member of the Seagate Baptist Church and is a past member of the Board of Deacons. He became a Master Mason April 20, 1970 when he was a member of the Friendship Lodge #84, Smithfield, NC; he affiliated with Wilmington Lodge #319 in 1992, was a lifetime member of the Wilmington Scottish Rite, member of the Sudan Shrine and Cape Fear Chapter # 346 OES. He was very active in his Masonic affiliations and has served as Master of his Lodge in 1998, for over a decade was the area Chairman for placement services in the Masonic Home for Children, Worthy Grand Patron of Cape Fear Chapter #346 OES in 2003 – 04, was a 32º KCCH with the Scottish Rite and was involved with many Shriners’ Fish Fry fund raisers.

Louie had a wonderful sense of humor and would lend his helping hands to anyone he knew and to some he didn’t. He loved to read and to spoil his grandson, Zachary. One of his proudest moments late in his life was attending his son’s commencement ceremony where he watched him receive his degree in Computer Engineering Technology along with the President’s Award for graduating with the highest honors. He was appreciated and loved by many and will be severely missed by all.

Wilmington Lodge #319 will open the Lodge of Sorrow at 1:00 PM prior to his memorial service which will be held at Seagate Baptist Church on Friday, October 8, 2010 at 2:30 PM.

In lieu of flowers it was his desire that contributions be made to the Lower Cape Fear Hospice 1414 Physicians Drive Wilmington, NC 28401.