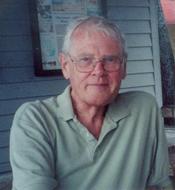 James Dean Murphy, 83, of Wilmington passed peacefully from his earthy life to his eternal rest on Monday, May 23, 2011 at his home.

He was born March 28, 1928 in Fall River, Mass., the son of the late Ambrose J. Murphy and Mary Gertrude Holmes Murphy. He was preceded in death by his brother Joseph Murphy and stepmother Mary Brandt Murphy.

Jim was a proud veteran of the US Army and Merchant Marines during WW II. He worked in the Motion Picture Industry in Charlotte, NC and later moved to Wilmington and retired from Radio Shack as a computer salesman in the educational field.

He was a devoted husband, father, son, and brother. After retiring, he and his wife spent many happy years camping and traveling abroad. His greatest pleasure was his visits to Ireland.

A funeral Mass will be held at St. Mary Catholic Church 10 am Thursday, May 26,2011. His urn will be placed at Sacred Heart Church in Southport, NC

Special thanks to Liberty Hospice for their care.

Please share memories and condolences with the family by clicking on the “Sign “”Guest Book” tab above.